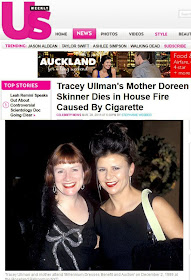 Now the giant US Weekly gossip magazine has also 'killed off' Australian actress Nell Campbell by publishing this photo claiming it is comedienne Tracey Ullman and her late mother Doreen Skinner who tragically died in a house fire last week. The photo, by one the world's top paparazzo Ron Galella shows Little Nell ( as she was called for years in Australia) and Tracey at a social event. Galella would never make such a mistake and his pictures would be carefully captioned. It's most unusual for an American publication to make such a mistake. They pride themselves on their fact checking down to the finest detail.
http://www.thesocialshuttle.com/ at 9:48 AM
Share 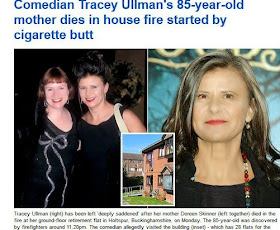 It's all the rage with newspapers these days- firing sub-editors and while they do the bloopers keep piling up. The latest is this  tragic story about comedian Tracey Ullman whose mother sadly passed away in a house-fire. To illustrate the news the UK Daily Mail has used a photograph they label as Tracey and her mother Doreen Skinner,
Alas the photo is actually of Tracey and Australian actress Little Nell who starred in the film of the Rocky Horror Show. Nell and Tracey are about the same age as is evident in the picture. 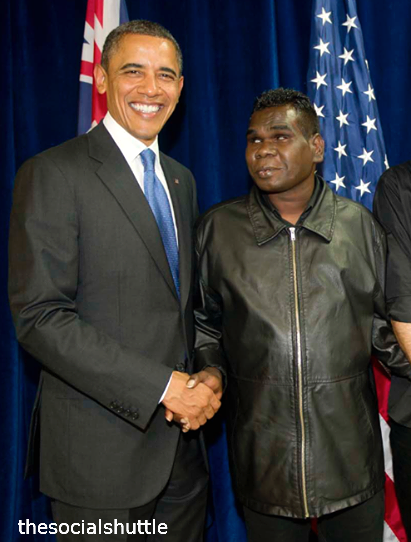 Right is our exclusive picture of the US President Barack Obama greeting Aussie indigenous star Geoffrey Gurrumul Yunupingu at the White House after he performed there for the Prez and guests last week.
Geoffrey is still waiting to be invited to perform at Admiralty House but there is time.
See a video of  Geoffrey singing 'Wiyathul', taken from the album 'Gurrumul' here.
http://www.thesocialshuttle.com/ at 4:51 PM
Share

End of an Era as Bill Bows Out 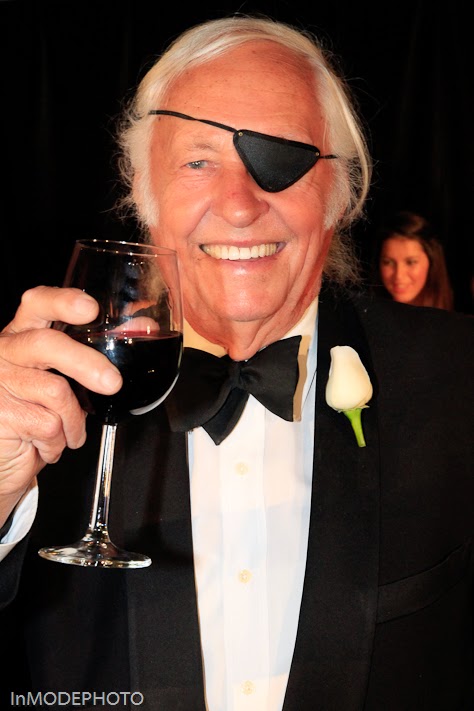 A chapter in Sydney's social history ends today as Man About Town and social snapper Bill Ranken hangs up his camera to retire to his country property. Home for Bill now is a magnificent sheep and cattle property about 3 hours from Sydney and just outside Goulbourn.
Lockesly has been in the family for several generations and is regarded as one of the finest properties in NSW with it's Georgian house, beautiful gardens and acres of rolling hills. Bill, at 86 years of age still takes an active hand on weekends, planting trees and sorting sheep. He will also pen his memoirs.
It's great loss for Whispers not only as a valuable source but someone who we spoke to almost every night to 'debrief' each other on the day's activities.
With Bill's keen sense of a humour and his ability not to take anything seriously- most especially himself, we could chat & laugh for an hour each night exchanging delicious titbit's which could not possibly be used in print.
Whispers first met Bill Ranken many moons ago at the Mayfair Gallery in London when he arrived
as the escort of the late HH Princess Margaret.
Peering at one of British painters Gilbert & George's giant canvases that detailed -well best to look up their history of painting- we overheard Bill saying to Margaret :"don't look too closely dear or it may put you off the canapes and champagne".
The Sydney & Southern Highland's newspapers LatteLife have penned a farewell piece to Bill which gives more insight into the life of this fascinating chap: 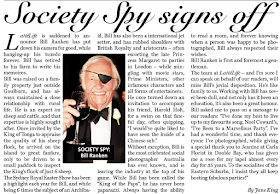 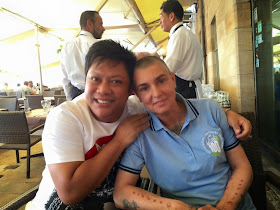 The perils of firing your sub-editors : Top Lawyer Christopher Murphy is elevated to QC level in News.com.au.

Seen at The Silver Party 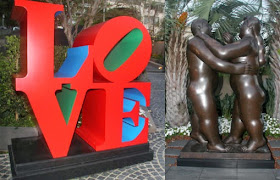 400 packed into John Symond's $60M Point Piper mansion -plenty of room- which was transformed into A Midsummer Night’s cocktail scene for the Silver Party's 9th annual bash to raise mega bucks for the Sydney's Children's Hospital.Amongst them - retired cricketer Stuart McGill and Julie Singleton, Skye Leckie, Karin Upton Baker, Nicky and Troy Tindill, Blainey North, Peter Overton, Lisa Wilkinson, Jesinta Campbell and a Wiggle or two, all shown in our snaps below.  Left is some of art-lover John's garden art.

When Whispers first encountered the amiable make-up supremo Napoleon Perdis many moons ago it was at the opening of his Parramatta salon on a Thursday afternoon. A small coterie of locals had gathered by the red carpet to watch the celebrations including 2 senior citizens who politely inquired of us whether the 2 tall elegant ladies ascending the salon stairs were "soapie stars". Alas we didn't have the heart to inform them that were actually drag queens, albeit fairly glamorous ones.

Napoleon has risen to giddy heights of stardom with salons all over the world including Beverley Hills (California!) where he is in huge demand especially by movie stars on the night of the Academy Awards but now he has turned his back on "high maintenance celebrities " according to this article.
Fortunately our home grown celebrities are still in favour as evidenced by society favourite, hair dresser Joh Bailey who wore what was acclaimed as the most superb mask of the evening created by Napoleon for the Silver Ball last week at John Symonds' Point Piper house. 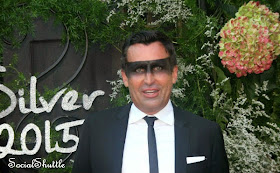 A Tale of Two Cities: 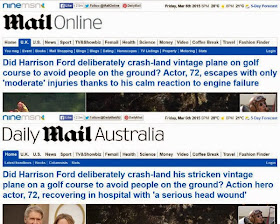 Our favourite, sometimes loathed (it's really the very best & worst of the tabloids in the world) the UK Daily Mail and Mail Online has differing thoughts for each country where it appears. Thus the terrible aeroplane accident involving superstar Harrison Ford was reported somewhat differently in the UK and Australia. Perhaps they perceive us colonials are made of sterner stuff  when they described Ford's injuries as "moderate" in the UK but "serious" in Oz! 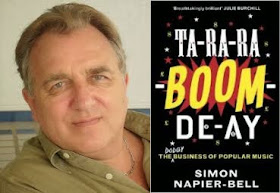 He was hoping to be in Sydney for tomorrow's Mardi Gras but alas business has delayed his visit. British music entrepreneur Simon Napier-Bell says he is disappointed to be missing his first Mardi Gras particularly as he was named as the UK LGBT (gay) Personality of The Year in 2009. .
Napier-Bell has discovered and managed some of the biggest names in pop music from the Yardbirds, Marc Bolan & T-Rex, Dusty Springfield and Wham and George Michael. 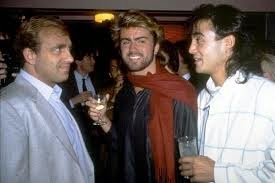 #In 1985 Whispers was a guest at the very first pop/rock concert in China- Wham- a ground  breaking event that had taken Simon two years of schmoozing Politburo members to pull off. It was a surreal occasion as several thousand Chinese audience, mainly party bigwigs and their families politely clapped after every song including Wake Me Up Before You Go Go. 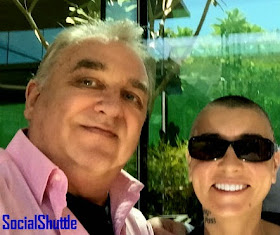 Napier-Bell has now written several best-selling books about the music business and his 2003 book Black Vinyl White Powder is regarded as the definitive book on the pop music business. But he has now gone back even further with his latest book Ta- Ra -Ra- Boom- De Ay-the dirty business of popular music which charts the history of music from the 18th century.
(left : Simon with Sinead O'Connor)
Napier-Bell will be in Sydney on the 19th of this month with Irish singer Sinead O'Connor who he manages, for her one and only Australian concert at the Sydney Opera House.
Below is the song Simon penned with Vicki Wikham for Dusty Springfield and which was a hit for Elvis Presley also :  You Don't Have To Say You Love Me.
Says Simon wistfully :"if I only had $1 for every time around the world I see drag queens miming to that song"! 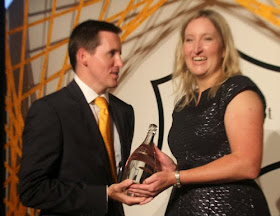 Sarah along with her mum Jan Slater from Swan Hill in Victoria have spent nine years building up their business, Simply Rose Petals.
Together with a small staff they freeze dry the petals and ship them around the world to customers for all sorts of occasions. Rose petals are popular for weddings and being biodegradable they won't ruin or stain a bride's dress or leave any mess for an aging vicar to sweep up. They've even supplied petals for the opening of a US  department store.
We think Sarah deserves her award- she wins a trip to France. And guests at the awards party in East Sydney got to toast Sarah with Veuve Clicquot Rosé (naturally) and vintage champagnes and that is  a very good thing.   Check out the Simply Rose Petals' website here.

Julia is all Smiles

It is without a doubt, one of Sydney's most elegant mansions in Wolseley Road Point Piper with the most commanding views of the harbour. Ville del Mare was the home of employment agency entrepreneur Julia Ross and had been on the market for some years as Ms Ross relocated her headquarters to London where she originally came from. 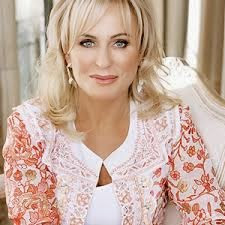 Last year the palace finally sold for a whopping $39M to 55-year-old Hong Kong property developer Hui Ka Yan who is listed as China's  15th wealthiest person.
Alas there are problems with the sale and Treasurer Joe Hockey has decided that the sale of the house breached Foreign Investment Review Board rules on foreign ownership. Hockey has given the new owner 90 days to sell or risk having it confiscated  by Commonwealth Department of Public Prosecutions.
But what news of the former tenant Julia Ross?. We can report that Julia is safely ensconced in grand premises in London's Belgravia and is loving life back in England. With (at least) that $39M.
http://www.thesocialshuttle.com/ at 1:40 AM
Share 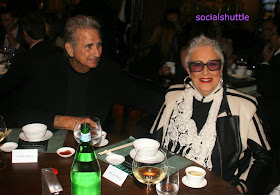 Left :  John & Merivale Hemmes at the opening of the Mr Chow Restaurant
Sad news today that one of Sydney's legendary fashion figures John Hemmes has died at age 83. John and his wife Merivale once were the King & Queen of modern fashion in Australia.
Today their  son Justin Hemmes rules over a nightclub empire with some of Australia's most fantastic night spots from the Establishment to the Beresford Hotel in Surry Hills.
Whispers has a life long history with the Hemmes. At the tender age of 18 we were hired to run a shop owned by their fierce (but friendly) business rival David Sheinberg whose father owned Sydney's Imperial Arcade and a string of fashion stores that were in competition with The House of Merivale, over seen by Merivale Hemmes and which presented Aussies with the very latest overseas fashion. John was always asking us to join his firm and although we declined, we have remained friendly with the family for decades,

John Hemmes was born in Surabaya, Java, Indonesia- his parents were Dutch and he was imprisoned in a Japanese POW camp as a teen before arriving in Australia with little money. Over the next 30 years he and wife Merivale built up a fashion empire. Today son Justin has continued this entrepreneurial spirit with an enviable restaurant and nightclub empire that employs around 5000 people in premises designed by his sister Bettina.